What are you reading if anything at all for the moment, and what are your views on it?

Currently finished reading Marvel’s WARZONES! Mrs. DEADPOOL & The Howling Commands. really good read if you’re a Deadpool fan. Let’s just say Deadpool is dead atm, Shiklah is about to marry Dracula and is trying to find the best way out of doing that so she and the commandos are off on a Indy style trek to find the piece of a ancient artifact that will destroy Drac and free the Underworld city Drac has ruled for roughly 8 Centuries. This is also part of Marvel’s Secret wars timeline. It’s a good read.

The Secret Wars #OldManLogan series is pretty cool as well. Somehow Logan survived the Super Villain get together and avoided the Superhero Massacre but killed the entire Xaiver school and X-men while under the mind influence of Mysterio. There is a bunch of time travel and Dimensional Plane shifting and Displacement. I’m following this the best I can but even i am getting confused at some parts of the story. Like Jennifer Walters (She-Hulk) supposedly was taken my her Cousin Bruce Banner after he went nutz and became evil and started inbreeding with her. yet we see Jennifer and Logan thrown into some pit someone called hell and she seemed normal/fine things like that just out in left field curve balls being thrown at ya as you’re reading. #Sorrentino really is doing a number with this one. 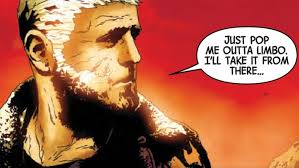