Binary translation, general virtualization, system emulation and so on

I remember that i started dynamic translation topic there. And here we go to continue it. I’ll begin with some shots of desktop systems, talking of solutions they provide. 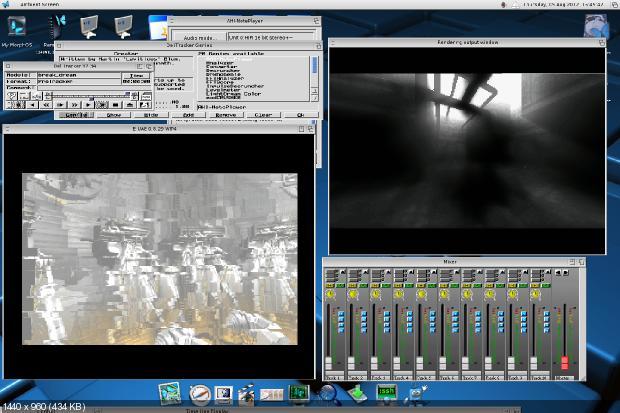 Commenting on apps windows, from left upper corner, moving clockwise: bombish tracker music player (and it’s child windows), supporting over 150 different module formats, called DeliTracker. It’s a m68k AmigaOS 3.x app running on MorphOS/PPC transparently via Trance JIT. The next thing is “We come in peace” by Elude. I’ts a modern demo, comes with 68k binary, but supports the whole set of Amigas: classic one, PPC-accelerated, NG Amigas and options: video - AGA, CGX; audio - ASC, AHI. The mixer window is part of Audio Evolution 4 multitrack recorder, it’s native PPC app for MorphOS. The last thingie is a Starstruck demo made by TBL. This one is AGA demoscene and hence, cannot be runned via Trance (as any other applications requiring OCS, ECS or AGA chipsets), with one exception - when you’re running MOS PowerUP edition on classic Amiga with AGA chipset and supported PPC accelerator (but in that case you’re forced to use uncomfortable solution: roughly speaking, hack-in`ing your app in startup-sequence between Trance and loading of GFX driver), then you could do it. So i’m running this demo work in full system emulator called E-UAE, simulating A1200 machine. Unfortunately, UAE hasn’t 68k JIT for it’s PPC port (while x86 one has it), so emulation is relatively slow.

In whole, MOS is a nice “Amiga Next Gen” OS, with interesting subset of features. It’s wholesome to read about, even if you don’t care of system itself. The most notable thing yet not fully implemented is system of “Boxes” (you may read notes [URL=“http://translate.google.ru/translate?sl=ru&tl=en&u=http%3A%2F%2Fru.wikipedia.org%2Fwiki%2FMorphOS”]here). The current main disadvantage of MOS is that you must pay for it, in return you’ll get hardware-locked key file for registering, otherwise you’re stucked with time limitation per working session.

Unfortunately, since PowerBook port is very fresh, still there is no 3D acceleration support for it’s integrated ATI option, so i wasn’t able to try any 3D editing packages for Amiga, remembering subject that we discussed with Marco. People had some success with LightWave3D 5.x/68k, Imagine 3D PPC/68k. Other titles mentioned, like Real3D, Cinema 4D. Blender port exists, as well. There are demo versions of some titles, but those titles claimed to be vaporware.
I also tried another bunch of demoscenes: native PPC ones for MorphOS and AmigaOS 4 ones (via OS4Emu wrapper), none of which worked for me, because they are all three dimensional

As for audio soft: i didn’t see any AHI-compatible software synthesizer yet, but modern tracker editors just work.